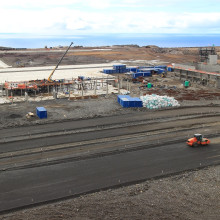 In November 2011, a contract was made between St Helena Government and Basil Read to Design, Build and Operate the St Helena Airport. Two anniversaries have been achieved since then, and the Airport project has gained both local and international attention. St Helena and UK Government hope that the Airport will lead to eventual financial self-sustainability for the Island.

To mark the construction of the Airport Terminal Building – the first welcoming doors all passengers will step through on St Helena – history, was made on Saturday 28 June 2014 in a special Commemorative Stone ceremony at the Airport site. There were over 100 guests present as HE Governor Mark Capes unveiled a Commemorative Stone at the front entrance of the Terminal Building, which was followed by the Blessing of the building and then burial of a Time Capsule by Prince Andrew School students

The Time Capsule buried on the day was to give future Islanders a picture of St Helena in 2014. Its comprehensive contents ranged from a St Helena Cookery Book to St Helena currency to USB sticks carrying a mass of contemporary material, and much more. This would ensure the future people of St Helena are aware of the vision – and of the hard work – of everyone involved in the Airport project.

The placing of the commemorative stone, made of local basalt rock, marks one of many significant milestones of the Airport Construction. Governor Capes spoke of the ceremony as a landmark and the construction of St Helena’s Airport as a mark of ‘massive progress achieved by Basil Read’. The Governor said:

“Deon de Jager and his team have shown that – with the right attitude, with determination, with a ‘can do’ mindset – so much can be achieved. Air access gives us the opportunity to halt the many decades of economic decline. To give St Helena the means to prosper by developing a vibrant economy, to give St Helena a confident, bright future that will reverse the flow of young Saints leaving the Island. That is the goal.”

Susan O’Bey Deputy Chief Executive for Economic Development, also highlighted
the ‘once in a lifetime opportunity’ the Airport will provide to ‘ensure that there is a viable St Helena in the years to come for our children and for our children’s children’.

Speaking of the project progress and of the hard work of all involved, was Basil Read Island Director Deon de Jager, Miles Leask from the Project Management Unit and Deputy Airport Director Clare Harris.

Before this memorable occasion, there has been immense progress during construction of the Airport. Below are just a few accomplishments:
• Friday 25 May 2012, the Temporary Jetty in Rupert’s was completed
• Tuesday 10 July 2012, the NP Glory 4 became the first ever ship to moor alongside St Helena at Rupert’s Jetty
• Friday 31 August 2012, the 14km Haul Road from Rupert’s Valley to the Airport site at Prosperous Bay Plain was opened
• The structure of the Combined Building which will house Air Traffic Control and Rescue and Fire Fighting Services is 95% complete. Brickwork is now 88% complete while plastering is 30% complete
• The Terminal Building structure is 58% complete
• The Control Tower structure is complete and the steel structure of the control room is being painted prior to erection
• Window frames and cladding angles are 65% complete and glazing will soon commence
• The massive Fill of Dry Gut, situated at Prosperous Bay Plain, is now around 90% complete and is scheduled to be completely filled by September 2014
• The first stage of the formal process to procure an Air Service Provider to St Helena began on 13 June 2014

The completion of St Helena’s Airport is scheduled for February 2016.

Following this week’s first ever Speakers of the House of Commons and Overseas Territories Conference 2022, details of the signed Communique can be found HERE   Read more...

We use cookies on our website to give you the most relevant experience by remembering your preferences and repeat visits. By clicking “Accept All”, you consent to the use of ALL the cookies. However, you may visit "Cookie Settings" to provide a controlled consent.
Cookie SettingsAccept All
Manage consent

This website uses cookies to improve your experience while you navigate through the website. Out of these, the cookies that are categorized as necessary are stored on your browser as they are essential for the working of basic functionalities of the website. We also use third-party cookies that help us analyze and understand how you use this website. These cookies will be stored in your browser only with your consent. You also have the option to opt-out of these cookies. But opting out of some of these cookies may affect your browsing experience.
Necessary Always Enabled
Necessary cookies are absolutely essential for the website to function properly. These cookies ensure basic functionalities and security features of the website, anonymously.
Analytics
Analytical cookies are used to understand how visitors interact with the website. These cookies help provide information on metrics the number of visitors, bounce rate, traffic source, etc.
SAVE & ACCEPT