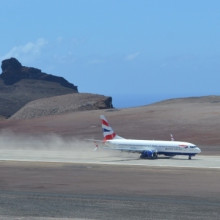 History was made on Monday 18th April 2016 when the first large passenger jet aircraft, a Boeing 737-800 (ZS-ZWG), landed at the new St Helena Airport shortly after 12.00 noon. This is the actual Boeing aircraft which will serve the St Helena/Johannesburg route.

As planned, British Airways (operated by Comair) brought in this ‘Implementation Flight’ from OR Tambo International Airport in Johannesburg, complete with various Comair, Basil Read and other passengers – plus a consignment of aircraft spare parts which will remain on the Island.

In preparation for the commencement of scheduled air services, the objectives of the Implementation Flight include route assessment, airside operations, passenger and cargo handling, training and various aspects of safety at St Helena Airport. It is planned that the aircraft will make a few flights over the next two days, before the Implementation Flight departs St Helena on Wednesday afternoon (20 April 2016).

Martin Louw, Operations Director for Comair, said on arrival:
“The flight itself was a ‘non-event’ – beautiful over the sea with a fantastic view of the Island coming into land. As you will have seen we did a few practice approaches just to make sure we understood the approach – safety is always paramount.”

Following this week’s first ever Speakers of the House of Commons and Overseas Territories Conference 2022, details of the signed Communique can be found HERE   Read more...

We use cookies on our website to give you the most relevant experience by remembering your preferences and repeat visits. By clicking “Accept All”, you consent to the use of ALL the cookies. However, you may visit "Cookie Settings" to provide a controlled consent.
Cookie SettingsAccept All
Manage consent

This website uses cookies to improve your experience while you navigate through the website. Out of these, the cookies that are categorized as necessary are stored on your browser as they are essential for the working of basic functionalities of the website. We also use third-party cookies that help us analyze and understand how you use this website. These cookies will be stored in your browser only with your consent. You also have the option to opt-out of these cookies. But opting out of some of these cookies may affect your browsing experience.
Necessary Always Enabled
Necessary cookies are absolutely essential for the website to function properly. These cookies ensure basic functionalities and security features of the website, anonymously.
Analytics
Analytical cookies are used to understand how visitors interact with the website. These cookies help provide information on metrics the number of visitors, bounce rate, traffic source, etc.
SAVE & ACCEPT