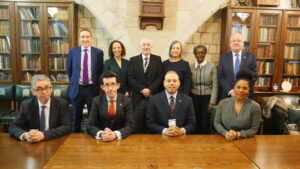 On Tuesday 21 January UKOTA held two important meetings in Parliament for its members.  The first was a meeting with the recently elected Speaker of the House of Commons, the Rt Hon Sir Lindsay Hoyle MP.

Sir Lindsay has been a strong supporter of the UK’s Overseas Territories throughout his time in the House of Commons and was keen to meet with UKOTA members at the earliest opportunity, following his election to the role of Speaker.

The meeting provided an opportunity for each Territory to update Sir Lindsay on the latest developments and key issues from their Territory.  It also provided an opportunity to discuss issues of importance to all Territories, including, parliamentary overreach, how we can work with the Speaker and others to increase levels of understanding amongst MPS with regard to the Overseas Territories, and how Sir Lindsay wishes to engage with the Territories during his time as Speaker.

This was a really positive meeting and we are incredibly grateful for the interest that Sir Lindsay takes in the Overseas Territories.  Representatives look forward to welcoming Mr Speaker to their respective Territories in the coming years.

The second meeting was an opportunity to introduce UKOTA and our members to newly elected members of Parliament and to update them, and more longstanding MPs and Peers on the latest developments and key issues in each Territory.  Importantly, the meeting allowed UKOTA to set out the constitutional relationship between the UK and the Overseas Territories, what powers lie where, and the legal underpinnings of the relationship.  UKOTA hopes that by making this clear to politicians we can avoid some of the difficulties that have arisen recently.

The meeting was also an opportunity for the Commonwealth Parliamentary Association (CPA) to give a presentation on one of their projects with the Territories.  The CPA are great supporters of the Overseas Territories and are always keen to work with us, it was therefore good that they were able to introduce some of their work to this cross-party group of MPs and Peers.