As borders close across South America, in response to COVID-19, the Falkland Islands has become one of the few places still willing to take cruise ships.

Working with UK Embassies in South America, the Governor’s office in Stanley, the local private sector, and British Forces South Atlantic Islands, the Falkland Islands Government have permitted and structured transit of passengers and crew to charter flights.  At the time of writing the Falkland Islands have repatriated 651 passengers and a number of expedition staff across four vessels.  A further two vessels were assisted totalling around 1,000 people that have returned home via the Islands.  There were 204 British nationals and 24 other nationalities in total. 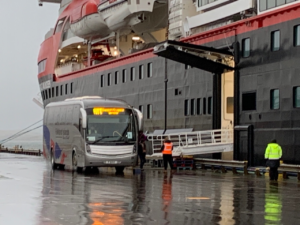 In one example, the Falkland Islands repatriated over 240 passengers to Australia, including more than 100 doctors and dentists who will now be able to play a vital part in helping Australia tackle COVID-19.

BAS people are now being ferried to the Falkland Islands with the intention of flying them on to the UK on the South Atlantic Airbridge.  This may take some time, so BAS has chartered a ship in Stanley to act as temporary accommodation.  The vessel will additionally act as somewhere to isolate the scientists and other staff as they move up from the Antarctic C for their benefit and that of Islanders.

All of these repatriations have been carried out under very strict conditions to ensure the protection of the civilian and military population of the Islands.