Living and travelling on and off remote Islands like Pitcairn will always bring its difficulties, but the additional issues created by Covid -19 made my annual attendance at the JMC incredibly challenging.

I had left Pitcairn in early February, on the last rotation to attend meetings in London including the JMC and UKOTA’s Political Council. Everything happened so fast, arriving in London mid-March, just as the world was shutting down became a race against time, to return to NZ a few days before NZ itself shut down.

On my return to Auckland on 22 March after an airport screening process I was cleared to travel directly to my cottage on New Zealand’s beautiful Coromandel Peninsula to commence my 14 days of self-isolation. Meantime, NZ with a spike of confirmed cases similar to Italy, closed down completely so I went seamlessly from quarantine to self-isolation until April 10. Finally, I drove to Tauranga to board the supply ship Silver Supporter for a 15 day journey to Pitcairn.

Pitcairn meantime had implemented its border controls allowing only residents and government officials to land. The 15-day voyage saw the vessel slow down to fit Pitcairn’s quarantine requirements so by the time I disembarked at Pitcairn I had been in quarantine for over 30 days. 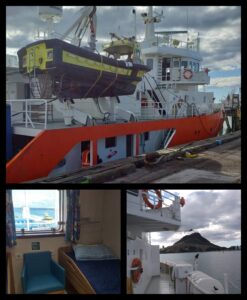 Internet was available but sporadic, weather went from calm to 8 meter swells conducive only to lying on one’s bunk. The vessel is nicely appointed, meals more than adequate when we were able to enjoy them, but the voyage inevitably dragged. Still I was able to catch up on my reading.

Happy to report that NZ is coming out of its lockdown having successfully addressed the pandemic. NZ is seen as a role model in this regard. Pitcairn is one of only 14 Countries and Territories around the world that remains Covid-19 free. And I am happy to be home.