This Friday we celebrate World Albatross Day on the Falkland Islands together with colleagues across the world. The day honours these magnificent birds and celebrates achievements in albatross conservation efforts. It also serves to raise awareness of the threats that many populations face due to introduced predators or by being accidently caught during fishing operations.

The Falklands are home to the largest breeding population of Black-browed Albatross in the world and our waters are the foraging grounds for many different species of Albatross. Here on the Falklands, the coordinated effort of government, local and international researchers as well as fishing companies has resulted in significant reductions in their bycatch and improved their conservation status.

Every year, Falklands Conservation monitors the largest Black-browed albatross breeding site at Steeple Jason, augmented by intermittent Island-wide censuses across the 12 breeding sites. Results from the census in 2017, shows that the population has been steadily increasing over the last decade and is likely at its highest since monitoring began in the 1980’s; over half a million breeding pairs! Two thirds of the population breed on Steeple Jason, Grand Jason and Beauchêne Island and these islands are protected as National Nature Reserves. Monitoring is critical to determine whether conservation efforts are paying off, and in the case of the Falklands’ Black-browed albatross it clearly is. Once listed as Endangered on the IUCN Red List, the species was re-assessed in 2017 to a better status of Least Concern. 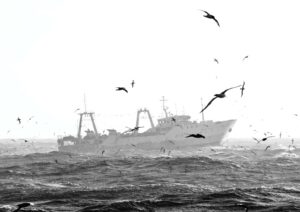 Fishing is the most important economic sector for the Falklands. Unfortunately fishing vessels are very attractive to albatrosses who see them as a source for an easy meal. They present a hazard with birds getting caught on baited hooks, tangled in nets or otherwise injured. The Falkland Islands Government, together with industry partners and researchers have worked tirelessly over the years to improve the understanding of seabird-fishing interactions and mitigate their effects. As a result, the Falklands fishery is now leading the way for other countries to follow. Development of techniques such as birds scaring lines (BSL), line weighting, restricted fishing periods, and discard management together with strict regulatory control have proved highly effective in reducing albatross mortality.

On land, the control of invasive species around Albatross and other seabird colonies means that our populations continue to thrive. Recent projects have worked not only to eradicate predatory species from around seabird colonies but also to increase local and landowner awareness of good biosecurity to protect our Albatross. Good biosecurity can help prevent wildlife diseases from establishing and spreading to different colonies and even humans. The Falkland Islands Government have worked closely with landowners which have seabird colonies to ensure that they have access to a footbath to help control wildlife disease.

Green Roads for the Rock

After months of Covid-19 lockdown the Government in Gibraltar is hoping to unlock to a greener and healthier Gibraltar. Ideas for a greener town centre with less road use and encouragement of walking and cycling are being proposed. Read more...