At the end of hostilities in 1982 several thousand landmines were left in the Falkland Islands.  Initially, UK Forces made considerable efforts to locate and clear the mines and booby traps.  Unfortunately, the efforts were costly.  Three soldiers suffered serious injury within the first few weeks of clearance and two others were injured in 1983.  As a result, the U 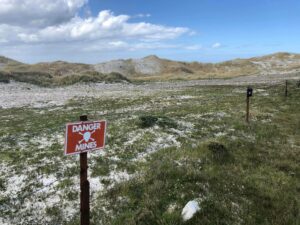 K Government decided to stop clearance efforts and instead fence off all suspect areas until such time as technology and processes had evolved that would reduce risk.  More than 120 areas were identified as hazardous.

From 1982 to 2009 some mines were destroyed in minefields by the UK military’s Joint Service Explosive Ordnance Disposal Detachment using remote controlled equipment.

Mine clearance was completed in November 2020. The clearance teams, with their Zimbabwean deminers, have destroyed over 10,000 AP mines and 1,700 AV mines along with 22 cluster bomb submunitions and over 370 booby traps and assorted items of unexploded ordnance (excluding small arms ammunition). This has resulted in the release of over 23,000,000m2 (2,338 hectares) of safe ground back to the community that had been prohibited from using many beaches and areas close to the capital, Stanley, and the main populated settlements.

So, when did the mine clearing work start up again, and why?

In 1997 the UK, alongside 121 other nations, signed the Anti-Personnel Mine Ban Convention, also known as the Ottawa Convention, which prohibits the use, stockpiling, production and transfer of antipersonnel mines and commits signatories to removing such mines from territories over which they have jurisdiction or control.  To that end the UK restarted clearance work in 2009 selecting SafeLane Global Ltd (previously known as BACTEC Ltd) to carry out the clearance work and Fenix Insight Ltd to provide the Demining Programme Office, responsible for monitoring the progress, quality, safety and environmental aspects of the work.

On November 14 2020 the Falkland Islands were officially be declared mine free.  Importantly, this also marks the UK’s fulfilment of its clearance obligation under the Anti-Personnel Mine Ban Convention.  This is a significant achievement as the UK Government will be able to declare that the UK and its territories are now mine free.

How do they do it?

The mines were laid in standard patterns using mine laying ‘strings’ to create irregularly spaced positions of eight mines as a row.  In most minefields three strings/rows were laid parallel to each other forming a ‘panel’; multiple panels form the minefield.  The documents handed over in 1982 by Argentine troops record the detail within each minefield and have proved to be credible records of the layout of panels.  Unfortunately, only about 70 per cent of the minefields had such records.  Using the records and any other information available a plan specific to that area was developed.  Clearance ‘lanes’ were then cut into the minefield from the outer fence.

The deminers used a number of techniques depending upon the type of mine, the terrain and the expected layout of the minefield.  The most effective and efficient clearance method in the Falkland Islands was for the mines to be dug out by a combination of machines preparing the ground and human deminers following up, finding and excavating the mines.

Most of the mines are described as minimum metal mines and can only be located at a few centimetres’ depth by the most sophisticated detectors available.  To achieve the minimum required clearance depth of 20cm a combination of metal detection and manual excavation methods were used.  Once rows were encountered, the mine patterns could be worked out and the mines found and destroyed.  Where there was no record, a technical survey technique was used to find the panels.

Clearing landmines is a slow and demanding process in normal circumstances, but in the Falkland Islands additional factors made the task even harder: the weather is often challenging with high winds, heavy rain, sleet and snow which, combined with thick, fibrous peat and heavy vegetation, make for waterlogged ground that can be extremely difficult to cut through.  Mines near beaches represented a particular challenge with blown sand being deposited as sand dunes: in Yorke Bay some mines were recovered over 15m below the surface.  Mines recovered must be disposed of by either incineration or demolition.  Mines that cannot be defused or are considered too dangerous to transport are grouped together and destroyed in controlled explosions.  Most of the mines were dug out by hand.  Coloured pickets and string are used to mark the boundary between safe and hazardous areas. The orange protective body armour and ballistic visor are the deminer’s last lines of defence should an unexpected detonation occur while working.

Some minefields were either occupied or traversed by penguins.  As part of technical risk assessments, it was confirmed that no local penguin was heavy enough to initiate a mine.  A comprehensive environmental assessment identified appropriate periods when demining would have the least impact on wildlife.  Special care was taken to ensure that no penguins were harmed during any mine clearance.

The minefields laid in the area known as Yorke Bay were covered by very thick layers of blown sand.  Overlying sand dunes were up to 15m deep and had to be removed in order to allow access to the mines.  The recovery of mines in this instance required the careful use of machinery to sift the sand using a system through which a mine cannot pass without being detected and recovered.

Many Islanders never thought they would live to see the day when their home was declared mine-free.  Saturday 14 November will go down in the Islands long history as a very special day, made all the more special by a personal message from HRH The Duke of Cambridge who had previously served in the Falklands and whose mother did so much to alert the world to the dangers of landmines.