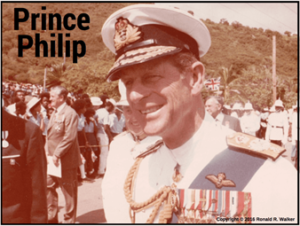 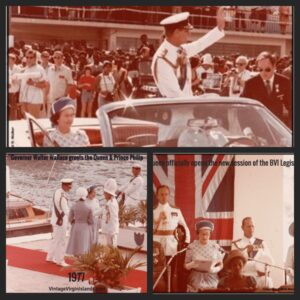 In 1977 on his second visit to the Territory, HRH The Duke of Edinburgh accompanied by HRH Queen Elizabeth II opened the Territory’s Legislative session in a newly refurbished building, including laying the corner stone of the new wing of the Peebles hospital.

MONTSERRAT: HRH The Duke of Edinburgh visited Montserrat in 1966 and 1993. 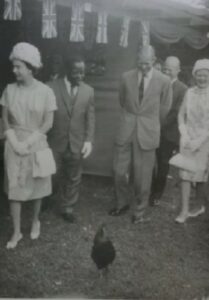 During the 1966 visit, the Duke accompanied HM The Queen to the Agricultural Show.

The second photograph below was taken during the 1993 visit, and shows The Duke pictured in front of Government House (which has since been destroyed during the volcanic eruption in 1995). 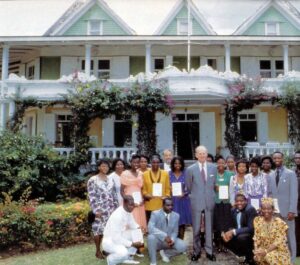 ST HELENA: St Helena and its community are saddened by the news of the passing of His Royal Highness, Prince Phillip, The Duke of Edinburgh. 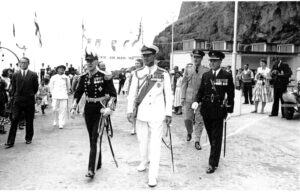 Prince Phillip visited St Helena in 1957, ten years after his wife Her Majesty The Queen’s visit as a Princess with her Royal Parents in 1947.

He arrived to St Helena on HMY Britannia and was greeted at the Jamestown Wharf by a large cohort of the Saint community. This was followed by an address at the Courthouse by the then Sheriff, where a parade was held including local authorities and organisations, ex-service men and women, Scouts, Girl Guides, Rangers, Brownies, Red Cross and the Salvation Army.

The Duke had heard many stories of St Helena from HM The Queen and expressed his delight to be able to finally visit the Island.

In just one day ashore Prince Phillip visited the new General Hospital, Jacob’s Ladder, Plantation House, Longwood House, Napoleon’s Tomb, Bamboo Hedge Flax Mill, as well as a quick visit to the A&F Department in Scotland. During his journey around the Island, His Royal Highness stopped to admire the spectacular views of Sandy Bay.

The Prince also spoke to locals at Windy Point above West Lodge with the then Governor Harford before visiting Francis Plain where a cricket game was in progress between a Royal Yacht team and an Island eleven. He then hosted a Garden Party at Plantation House with over 300 guests representing all aspects of life on the Island, from shepherd to shop-owner and from flax cutter to fisherman, where he made an effort to speak to as many locals as possible.

Whilst on-Island, His Royal Highness was asked to officially open a children’s playground in Jamestown, which was named the Duke of Edinburgh playground in his honour. 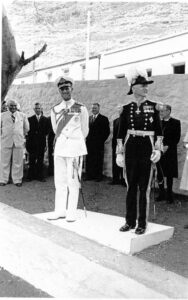 After a long day ashore, the Prince arrived back at the Wharf in order to return to the Britannia. Here he found most of the Island population waiting to give him a royal send-off.

At 8pm, invited guests including locals and members of the Government were entertained to a dinner party held on board the Royal Yacht.

Soon after the guests returned, and at exactly 11pm, a signal gun was fired and HMY Britannia and His Royal Highness sailed away from St Helena.

PITCAIRN ISLAND: The visit to Pitcairn of HRH the Duke of Edinburgh and Lord Louis Mountbatten, arriving on the Royal Yacht Britannia in February 1971. 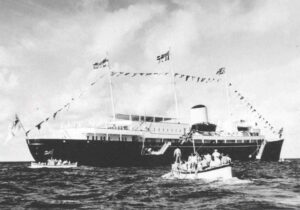 Their visit is warmly remembered by the community. After spending a day on the Island HRH invited the entire Pitcairn community to dine on the Royal Yacht. 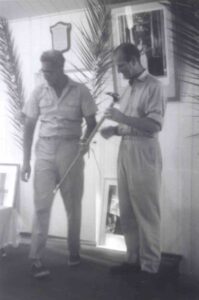 HRH with the Mayor of the time Purvis Young.

TRISTAN DA CUNHA: The Duke of Edinburgh’s visit to Tristan da Cunha on 17th January 1957 was the single most important social event in the island’s history and ever since then he showed a constant interest in the island and made a special contribution as a royal and loyal friend. 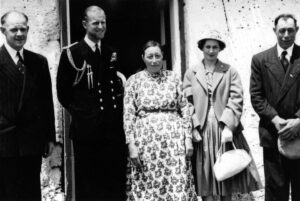 The island has sent its deepest condolences to Her Majesty.

GIBRALTAR: His Royal Highness, Prince Philip, always had an interest in Gibraltar and was a great supporter of the Gibraltarians.

He first visited in November of 1950 when he officially inaugurated our then Legislative Council, and visited again, with Her Majesty the Queen, in 1954 on their tour of the Commonwealth.

Prince Phillip also visited on a number of other occasions. In 1957, he personally berthed the Royal Yacht Britannia alongside in our Dockyard on the final stop of his Antarctic Adventure.

On that visit, he remained on the Rock for 10 days. 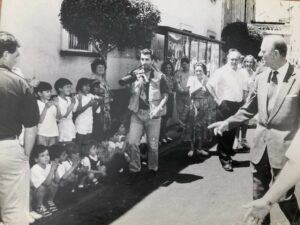 Additionally, his Duke of Edinburgh Award Scheme touched the lives of many young people in Gibraltar and around the world.

And in 1991 he personally piloted the aircraft on which he flew into Gibraltar Airport when he visited us to celebrate the 25th anniversary of his Award Scheme.

Picture: Prince Phillip engaging with Gibraltarian schoolchildren during his visit to the Rock for the 25th anniversary of his Duke of Edinburgh’s award scheme.

FALKLAND ISLANDS: The Duke of Edinburgh visited the Falkland Islands in 1957 and 1991. 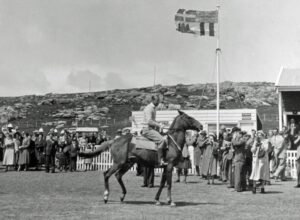 In the 1957 photograph, he is at Stanley Races where he took part in five races.  The highlight of which was the Sailors’ Race in which HRH finished first on a horse which had never previously won. As he passed the post the Royal Yacht band played All the Nice Girls Love a Sailor.

In the 1991 photograph he is meeting members of the Falkland Islands Defence Force. 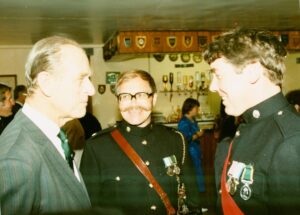 TURKS AND CAICOS ISLANDS: The Duke of Edinburgh has made the most Royal visits to the Turks and Caicos Islands. He first visited the Islands in 1966 when he accompanied his wife, Queen Elizabeth II, visiting Grand Turk and South Caicos on the Royal Yacht Britannia. 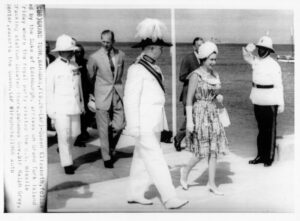 In 1977 and again in 1980 the Duke of Edinburgh made brief stops at Grand Turk airport.

The Duke of Edinburgh last visited the Islands in March 1993 carrying out engagements in Grand Turk and Providenciales.